How do we keep this site running? This post may contain affiliate links, for which we may receive a referral fee. The cost is the same to you and any compensation we may receive does not affect our reviews or rankings. Thanks!

As you may know, Intuit sold Quicken to H.I.G. Capital earlier this year (in March).

This was a great thing and will make Quicken a much better product.

H.I.G Capital is investing a lot of money in improving and modernizing Quicken to better compete with other personal financial products.

Quicken is still hands down the best personal financial management software for the desktop, but there are several products competing in the cloud arena, so Quicken needs to step up their game.

The newest version, Quicken 2017, was released just two weeks ago on October 13, 2016. This is the first Quicken release since H.I.G. Capital took over, so we’ll see how it turns out. I’m hopeful and users are already reporting a much improved product over last year’s version.

The reviews on Amazon are averaging 4.5 stars! That’s the most I’ve ever seen for Quicken!

New features this year include:

Plus the new features from last year are still there: 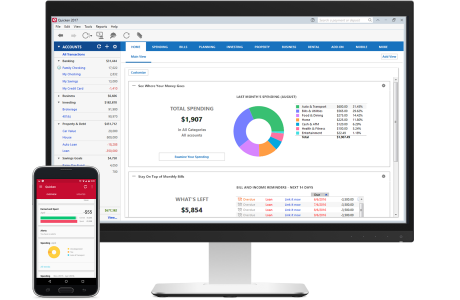 Like previous years, there are still 5 versions of Quicken, plus a Mac version. The Windows versions include:

[fsbProduct asin=’B01M6USTSH’ align=”right”] The Mac version is very similar to the Windows Deluxe version and is much improved over previous Mac releases. This is by far the best Mac version of Quicken yet.

To help you decide which version to get, we’ve created a Comparison Chart that includes all the major features of each version, plus the best prices from various online retailers so you can make sure you’re getting the best deal.

Now is a great time to buy Quicken because it’s currently on sale at Amazon for $20 – $40 off depending on the version.

Check out this video showing you how to install Quicken 2017, plus you get a quick peek at the new layout.

Subscribe to the Top Financial Tools YouTube channel to see my other Quicken 2017 videos as I add them over the next few days.

Nate Phillips has been using Quicken and TurboTax for over 20 years. He has spent part of that time as a Quicken beta tester, helping identify bugs and annoyances with Quicken updates before they are released. Nate holds a master’s degree in Computer Science and has numerous technology certifications.

TopFinancialTools.com is a participant in the Amazon Services LLC Associates Program, an affiliate advertising program designed to provide a means for sites to earn advertising fees by advertising and linking to Amazon.com. Amazon, the Amazon logo, AmazonSupply, and the AmazonSupply logo are trademarks of Amazon.com, Inc. or its affiliates. Certain content that appears on this site comes from Amazon Services LLC. This content is provided ‘as is’ and is subject to change or removal at any time.